Join us this Sunday, August 9, 2020 from 1 to 3pm slt as Kultivate’s KDEA 3D Arts Foundation formally launches! Kandis Dene Endowment for 3D Arts or KDEA is the charitable branch of Kultivate that aims to support 3D artists specicially by offering each artist significant space and prims to build the 3D art installation of their choice! You can learn more about KDEA here: https://kultivatemagazine.com/kdea/

Our first grant receipient is Ilyra Chardin, who presents her 3D installation, “Evolution.” Evolution will open formally on Sunday, August 9, 2020 from 1 to 3pm slt with 2 hours of performances by Wolfie Starfire (1pm to 2pm slt) and Erika Ordinary (2pm to 3pm slt). Dress code is casual for both events and the slurl:  http://maps.secondlife.com/secondlife/Water%20Haven/153/163/22

You can learn more about Ilyra below:

Ilyra Chardin is an artist and designer, whose work has been featured in numerous installations and exhibits across the grid. Her art work crosses media and styles, spanning from real life and digital to SL art. First and foremost, Ilyra is a story teller. Whether in full SIM, 3D installation, sculpture, or 2D (original mixed media, hand-painted, hand-drawn, and photo) art, she includes multiple layers with depth of meaning. Her work has been the subject of numerous blogs, machinimas, and has been featured on Designing Worlds.

A selection of her artwork may now be viewed in a permanent exhibit at Emergent. Current Exhibitions & Art Installations change frequently and are best seen by looking at ilyra’s profile main page and in picks.

Join us at Dene Art Gallery, in Rosehaven, from 3 to 5pm slt on Monday, August 3, 2020 as we present the art of Mary Layton!

Join us from 3 to 4pm slt for a 1 hour performance by Max Kleene, followed by 1 hour of DJ music by DJ John (4 to 5pm slt). Casual dress code for both events!

You can learn more about Mary Layton below:

Mary Layton paints stuff. Mostly mythic, fantasy, fairy stuff. Her favourite media are watercolour, pencil, pen & ink, and digital. Over the past couple of years, she has created content for the virtual world Second Life, including in-world homes and furnishings, décor (including virtual canvases of her artwork), items of clothing, and most notably, jewellery.

Her Second Life creations can be found in-world at Rosehaven Laudanum, Caledon II, and at various in-world events, or online at the SL Marketplace.

Mary is also an author and published her first novel in 2015, a paranormal romance titled “Chasing Demons” as M. E. Layton. She lives with her husband in North Carolina.

Join us this Sunday, August 2, 2020 from 1 to 3pm slt as Kultivate presents the Art of Kisma Stepanich-Reidling! This event will feature live performers Wolfie Starfire (1pm to 2pm slt) and Dimivan Ludwig (2pm to 3pm slt) with a casual dress code at both events!

You can learn more about Kisma below: 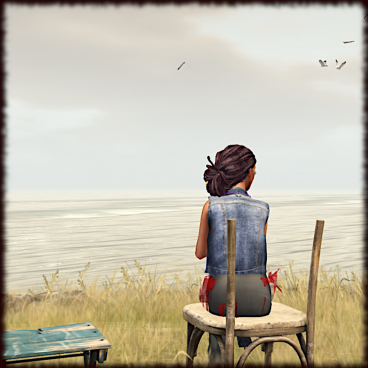 Hi, I’m most happy to come into SL and share my real life paintings with you.

The best way to explain who I am and what I do is to simply invite you to my website.

You are very welcome to join me in one of my live zoom classes/circles or enjoy experiencing one of my FREE online video classes. Naturally, if you live in Orange County, California, once in person activities resume, join me in a class! I have lots of fun!

In the meantime, come on over to my NEW studio, courtesy of the Phoenix Artists Collaboration group (Thank you Audie and Skye) located on the gorgeous Cherished Melody sim and have a look at what I’m currently showing in honor of the Divine Feminine.

If you see something you like, just get me an IM or just say “hi” — I love to chat! 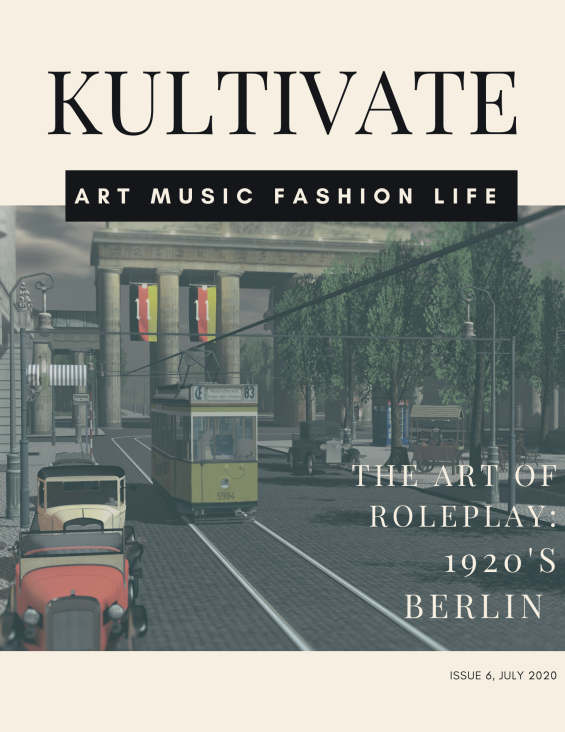 Kultivate is pleased to announce KDEA (Kandis Dene Endowment for 3D Arts) Grant program.KDEA grants are for 3D artists and we have 3 parcels to choose from, all free of charge! Each grant also includes a 2 hour free exhibition opening with 2 live performers! For more info and to apply: https://kultivatemagazine.com/kdea/

Join us Sunday, July 19, 2020 from 1 to 2pm slt for the July Exhibition Opening at Kultivate Select Gallery! This gallery is Kultivate’s only outside and themed gallery and this month’s theme is portraits!

The event will feature live performer Loreen Aldrin with a casual dress code and the following artists are exhibiting: 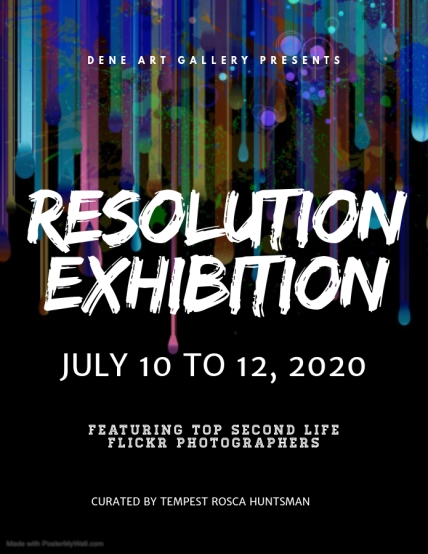 Today is Day #3 of the Resolution Exhibition, featuring over 30 talented Flickr artists and photographers! Join us for a 3 hour closing party::

For a list of artists and a complete live performer listing:: https://kultivatemagazine.com/resolution-exhibition/

Today is Day #2 of the Resolution Exhibition, featuring over 30 talented Flickr artists and photographers! Today’s events are:

For a list of artists and a complete live performer listing:: https://kultivatemagazine.com/resolution-exhibition/

Kultivate’s latest gallery, Dene Gallery, presents the Resolution Exhibition! This special three day exhibition will feature some of the top talented photographers and artists that can be found on Flickr. The exhibition is curated by photographer and artist,  Tempest Rosca (Huntsman) and will feature 3 days of live music.

About Dene Gallery & Kultivate:
Dene Gallery is part of the Kultivate family of galleries and is located in Rosehaven. The gallery is curated by Tempest Rosca (Huntsman) and highlights one artist each month. Kultivate consists of Kultivate Magazine, Windlight Art Gallery, The Edge Gallery, Kultivate Loft Gallery, Kultivate Signature Gallery, & Kultivate Select Gallery. The goal of Kultivate is to promote and support the cultural aspects of Second Life. Kultivate is proud to be the official sponsor and media partner of Team Diabetes of Second Life, an official and authorized team of The American Diabetes Association. 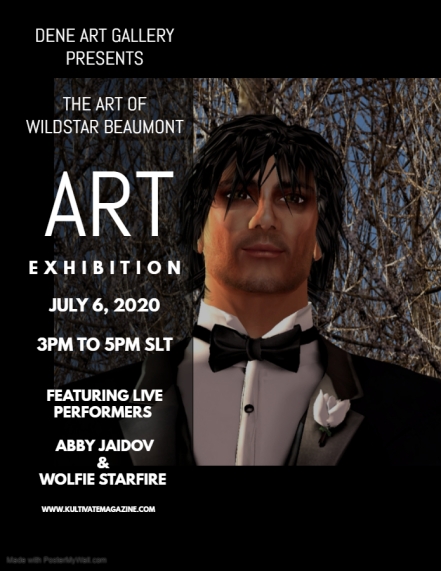 You can learn more about Wildstar below: 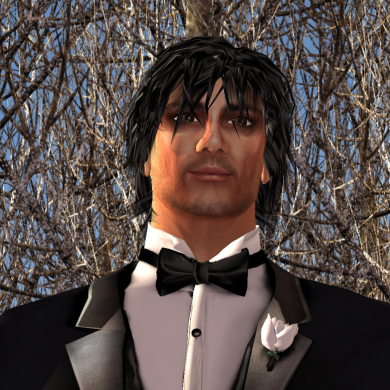 Hello, and thank you for you for taking time to read this and for taking an interest in my work

I am Wildstar. I joined Second Life in 2007 and I have been an active resident ever since. I live in Rosehaven, a medieval-fantasy sim which is part of the Steamlands, those nations in SL more or less inspired by the steampunk culture. Rosehaven is also home to my little gallery, the Bright Star Gallery. You’ll find the LM in the same folder where you found this notecard.

Photography became part of my second life pretty soon, actually almost immediately. I have photos of noobie-me a few days old. After a few weeks, once I made my very first friends, I was asked to take photos at a wedding. It was the first of several.

After a while I started entering a few photo contest. I remember fondly the one organized in Grignano by the late Osprey Therian, a legend of Second Life.

One of these contests brought me to become the official photographer of the Second Life Shakespeare Company, active until around 2010, that made some unforgettable productions of Hamlet and the Twelfth Night, in world.

By then photography had become a significant part of my Second Life. I have become an official photographer for Relay For Life, for which I have covered the seasons from 2011 to 2020 as much as I could. I was also a photographer for the now defunct Primgraph Magazine and for the Prim Perfect Magazine, one of the most known periodicals in Second Life.

I am also the photographer for Designing Worlds, one of the premiere TV Shows produced in Second Life. Every week I produce a slideshow of still images complementing the videos of the current episode. Over the years I have had the opportunity to cover some of the most fantastic results of the creativity of the Second Life residents.

I consider myself a landscape photographer and I love to capture and preserve the beauty that can be found in SL.
I particularly enjoy color in my photography, both in SL and in RL. Deep blues and flaming reds can often be found in my photos. In SL I also love to play with shadows. Photography means “writing with light”, and Second Life offers such great opportunities to play with light source and create unique landscapes.

Capturing the various editions of the Second Life birthdays has also been something I love to do. Here you can see on display a selection of my capture from the previous eight editions.

I hope you will enjoy my images as much as I did taking them.

Join us this Sunday, July 5, 2020 from 1 to 3pm slt at Kultivate Loft Gallery, as we present the art of Myra Wildmist! The event will feature 2 live performers with a casual dress code.

You can lear more about Myra below: 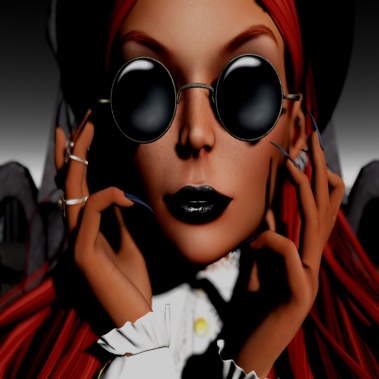 BIOGRAPHY:
My art primarily explores the freedom online communities, specifically Second Life, provide, allowing you to set aside your cultural roles and explore other roles. Real life cultural roles are necessary for a functioning society, but they are often extremely confining, almost forcing people into pigeonholes of expected behavior. Second Life gives us all the opportunity to slip out of our pigeon holes and be almost anything we can imagine.

END_OF_DOCUMENT_TOKEN_TO_BE_REPLACED

Join us today at Mad Mare Pub & Dene Art Gallery, from 3 to 5pm slt for music and trivia! From 3 to 4pm slt we have live performer DimiVan Ludwig and from 4 to 5pm slt we have music from the British invasion era with London trivia! DJ John will provide the music during this hour and both events have a casual dress code!

The 5th Anniversary Issue of Kultivate Magazine is now available! This issue features 55 images from some of the best artists and photographers in second life, SL17B, Grauland, The Hannington Endowment of the Arts, a photo essay on Rosehaven, Lyrical Café, DJ Neo Storm, Safari Park & The Happy Hat, Mangyeong. We also have 3 fashion looks you may want to try this summer! Click the cover below to view this issue.

The 5th Anniversary Issue of Kultivate Magazine will be published on Wednesday, June 24, 2020! As this is a special issue we will not tell you what is in the issue, but we will give you a sneak peak of the cover! Very special thank you to Tempest Rosca-Huntsman for the cover image: 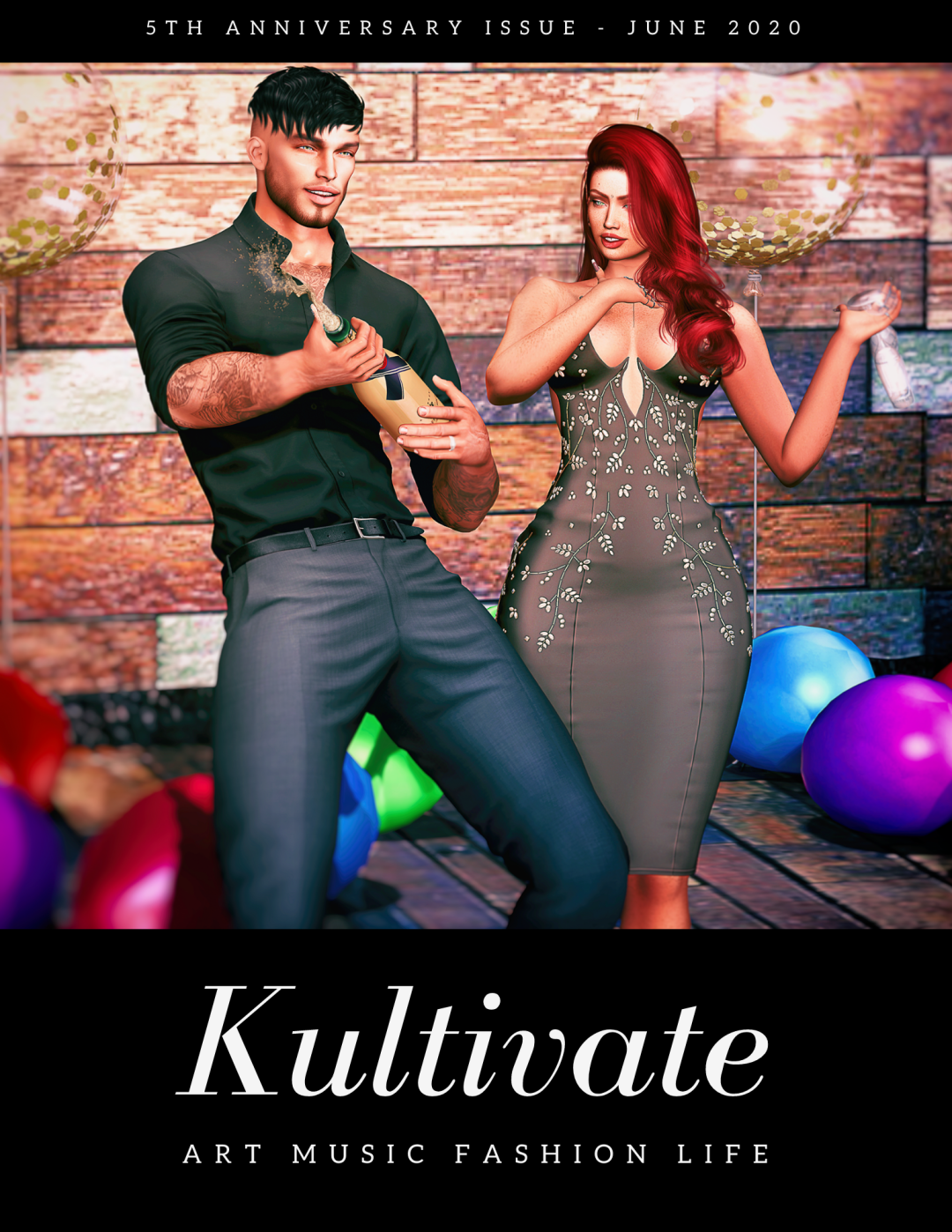 casual dress code for both events

Today is day #2 of the 5th Annual Kultivate Anniversary Weekend, celebrating 5 years of Kultivate on the grid! Today’s events are:

Come out and celebrate with us! 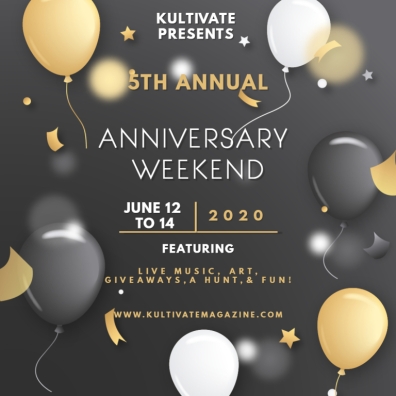 Kultivate turns 5 this year and the annual anniversary weekend is returning June 12 to 14, 2020! This special weekend will feature a special art exhibition, live music, & giveaways!.

From 2 to 3pm slt we have DJ John and 1980s tunes, plus trivia! Stick around from 3 to 4pm slt for live performer Abby Jaidov. Casual dress code for both events! 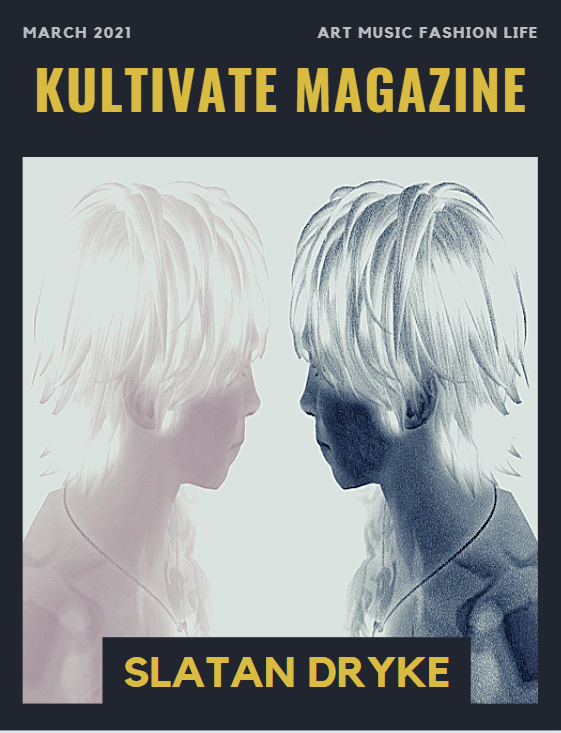