It’s time to highlight another week of storytelling in Voice by the staff and volunteers at the Seanchai Library. As always, all times SLT, and events are held at the Library’s home at Holly Kai Park, unless otherwise indicated. 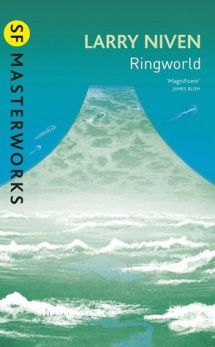 Gyro Muggins reads the first in Larry Niven’s science fiction series focused on a gigantic artificial ring, the Ringworld, built around a far away star at a distance roughly equivalent to the orbit of the Earth around the Sun.

Roughly 1.6 million km wide, the ring rotates slowly around its central star to provide a gravity on its inner surface roughly equivalent to that of Earth, and it has an atmosphere suitable for humans. It was built by a race known as the Puppeteers, who have been working to affect both humans and the cat-like, warrior Kzin.

Regarded as a classic, Niven’s novel (and…